The writing below began as an email exchange that eventually was used by the National Motorists Association in their NMA E-Newsletter. Learn more about the NMA at Motorists.org.

A basic principle held by the National Motorists Association is, “Reasonable highway user fees [are] for maintaining and improving highways, not for financing non-highway projects.” (See the other main NMA tenets here.) The recent class action lawsuit the NMA filed with truckers’ association OOIDA against the Pennsylvania Turnpike Commission for many years of excessive tolling speaks to a commitment on behalf of all highway travelers, including commercial drivers.

The debate still rages as to the most practical, efficient method of levying road user fees to pay for maintaining the integrity and capacity of public highway systems. To be clear, our definition of “efficient” here includes applying the fees to the purpose for which they were collected, an apparent ethical challenge for many lawmakers and transportation authorities.

The Taking Tolling to Task NMA e-newsletter about our Pennsylvania lawsuit triggered a great deal of interesting feedback from members, not just on the issue of tolling but also with respect to the collection and spending of road user fees. Here is one such exchange with Sherman Johnson, a Maryland member, which touches on various aspects of that very question:

I am very glad to see that the NMA (and OOIDA) is suing the PTC and the governor of PA over excessive tolls on the Turnpike. The overcharges shown in the chart are outrageous! Ideally this case will go to the US Supreme Court and exorbitant tolls will be outlawed across the country.

Even when tolls are set at a rate that is just enough to cover maintenance and repairs to the infrastructure in question, they are still regressive taxation. In my opinion, almost all tolls should be eliminated, and all infrastructure maintenance & construction should be paid for with the motor fuel tax. The “gas tax” hasn’t been raised since 1993. It could be raised (both state & federal) by say 50% — approx. $0.25/gallon increase — and that would raise a significant amount of money while having a minimum financial impact on most drivers.

Of course most politicians do not want to be seen as “raising taxes” but this clearly needs to be done. The money has to be raised somehow.

My understanding is that the gas tax never did pay for 100% of maintenance & construction costs but it covered a good portion, maybe 60-70%. It seems reasonable for some percentage of transportation infrastructure costs to come out of general funds. After all, even those who do not drive benefit from a good transportation system.

Good luck with the lawsuit. It really made my day to read about that!

The NMA has felt since the Jim Baxter days and still feels that the most efficient and effective method of funding the upkeep and expansion of our highway infrastructure is through the fuel tax paid per gallon at the gas pumps. The National Academy of Sciences studied the issue a few years ago and determined that a typical toll facility has administrative, collection, and enforcement costs that are about 33% of collected revenue. The cost of collecting the fuel tax at the pump is more like 1% of collected revenue. Now with all-electronic (cashless) tolling taking over for many of the older drive-through booths, the overhead cost is being reduced quite substantially but it still isn’t going to approach the low admin cost of the fuel tax.

That’s not to say there aren’t issues with collecting a tax at the gas pumps. The word “tax” is anathema to many people and that has resulted in both the federal and most state gas tax rates being frozen for the better part of the last 20 years. The rates should be indexed to the consumer price index (particularly as related to construction costs) and adjusted annually. The other issue is that the gas tax revenues are often diverted to other non-highway purposes, a violation of the trust of motorists who pay the fuel tax in good faith that the proceeds are being fully applied to maintain/improve our roads, bridges, and tunnels.

You might like this NMA opinion piece on the subject of mileage-based user fees and the gas tax. It was written a few years ago for The Ripon Forum, a magazine by the conservative Ripon Society.

The only concern I have about the motor fuel tax is that again — like excise taxes — it is a regressive tax. I’ll say up front that I think that problem can be alleviated.

Poor and working class people often cannot afford to live in or even near employment centers –- at least not in major metro areas. So not only are they earning less, they are driving more (on average). To compound the problem, they may have no choice but to drive a pickup truck, or older model car that doesn’t get great mileage.

Then there are farmers and ranchers who must also drive long distances, often in trucks that get 10-12 mpg. The current fuel tax could double or triple and it would not really affect people who are well-off, but for others it would be a large added expense.

My proposal to address this is to allow people to apply for cards that would be inserted before pumping fuel — the same way a person might use a discount card. The card would instruct the pump to charge the customer some amount less than the standard tax.

I’m fully aware that my plan will probably never fly, but it does seem more fair than charging the fuel tax to some poor guy or gal from WV or PA who is commuting 80 miles one-way to a job in the Baltimore/D.C. area that pays $10-$12 per hour.

Other than that issue, I continue to think that the fuel tax works well. ‘If it ain’t broke, don’t fix it’. 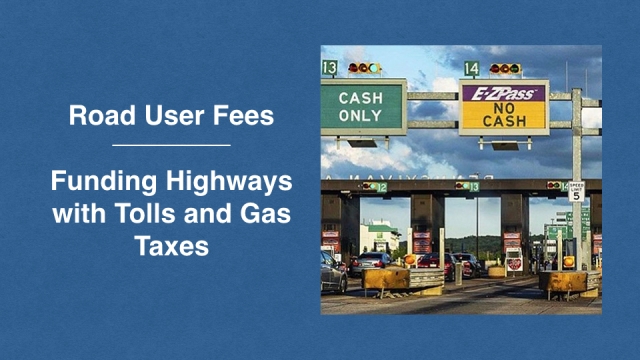